Fever London is one of Britain’s most exciting independent fashion brands, with collections inspired by beautiful vintage prints and feminine silhouettes. We’ve been working with the brand since October 2013 looking after their natural search strategy. To date, this has involved integrating their content, social media and online PR activity to help establish the brand as an authority on vintage fashion.

As part of our on-going work, last month we supported Fever London with the launch and promotion of their Perfect Fit Model Competition. Our mission was to find five ‘real life’ models in a variety of different dress sizes who would take part in a photo shoot in and model key pieces from Fever London’s SS14 collection. From April 2014, these images will be featured on product pages on Fever London’s website to show exactly what each design would look like on real women in sizes 8 to 16.

We developed this campaign specifically to grow and increase engagement of Fever London’s social media audience across all platforms, particularly Facebook. We also wanted to boost online brand awareness for Fever London by contacting relevant fashion and vintage bloggers and publications about the competition.

The competition launched on Facebook in January and we were thrilled with the coverage and buzz it received. There were 65 entries for the competition and a whopping 11,900 votes were cast! The final winners were Catherine of Not Dressed as Lamb, Deborah of Bang on Style, Elizabeth of What Lizzy Loves, Celina and Nikki who all received the most votes in their size category from Fever London’s Facebook fans.

Last Saturday, the five competition winners headed up to Fever London’s headquarters and spent the day being pampered and styled for their photo shoot. Our senior social media and content consultant Alice also went along to capture all the action on the day and we thought it would be nice to share some of her photos. I think you’ll all agree the models looked fabulous!

Should we have models that are all different sizes?

The final images from the models’ photo shoot will be up on the Fever London website on the 1st April and we will also be sharing a full case study about this work shortly. Watch this space! 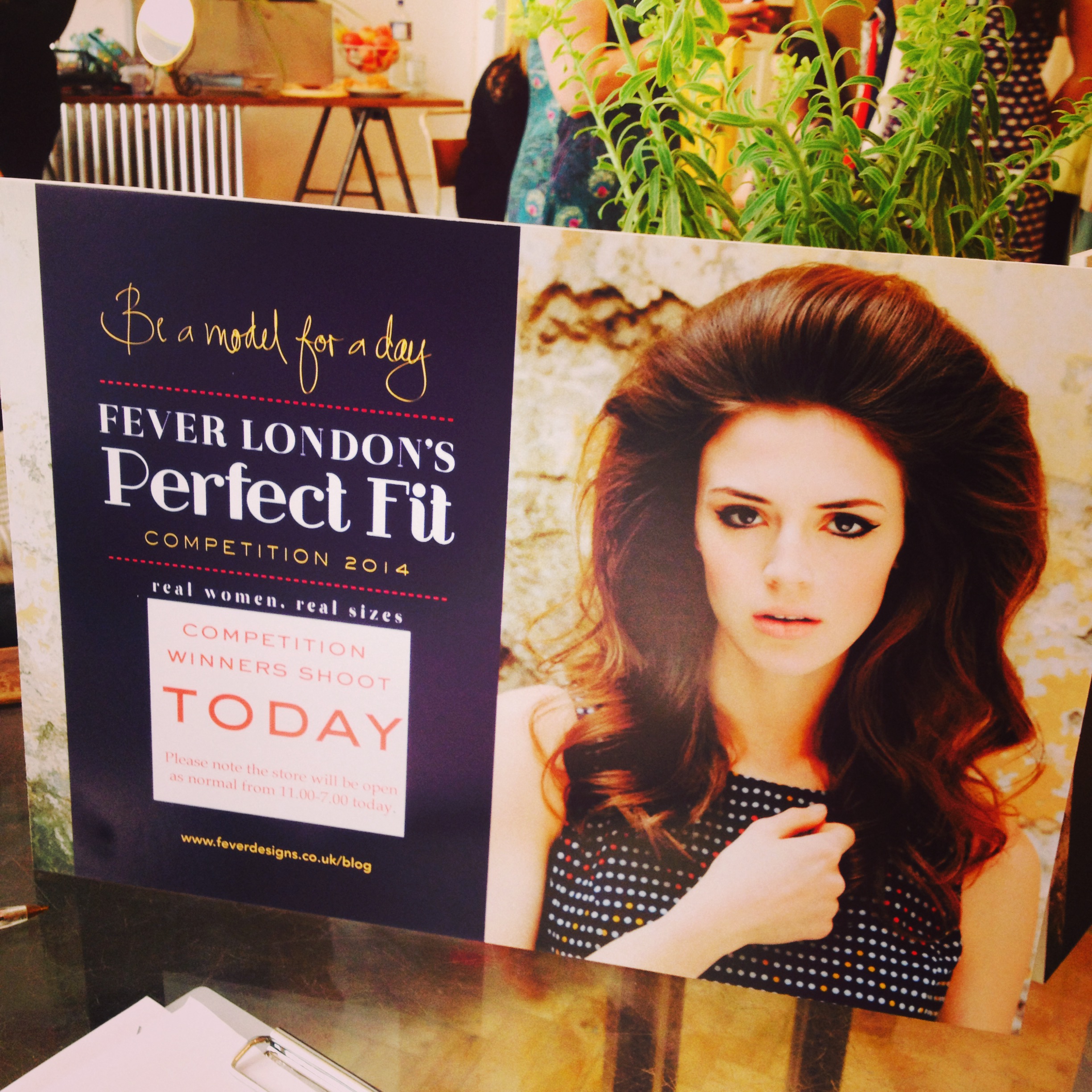 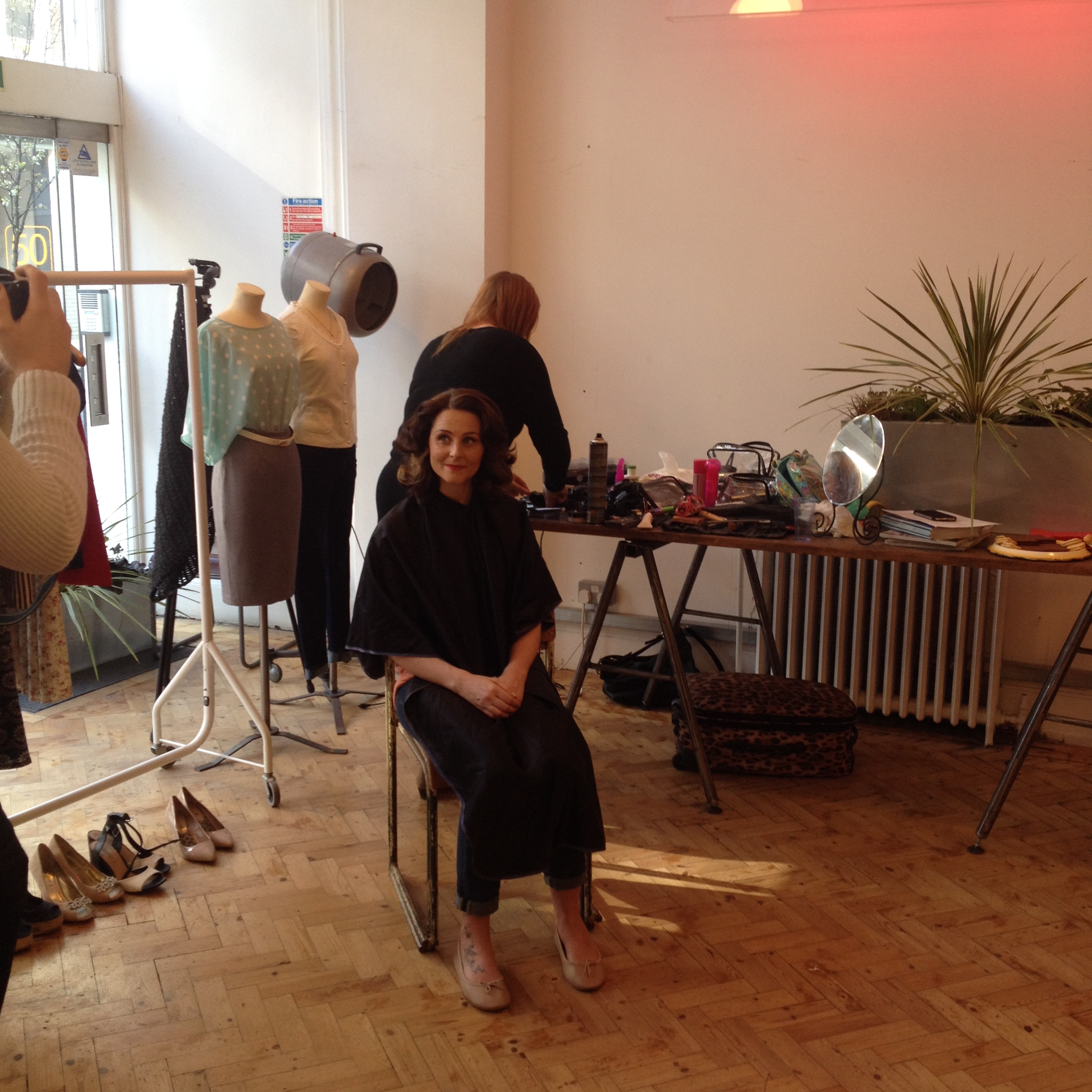 Deborah being made-up with her vintage-inspired hair do. 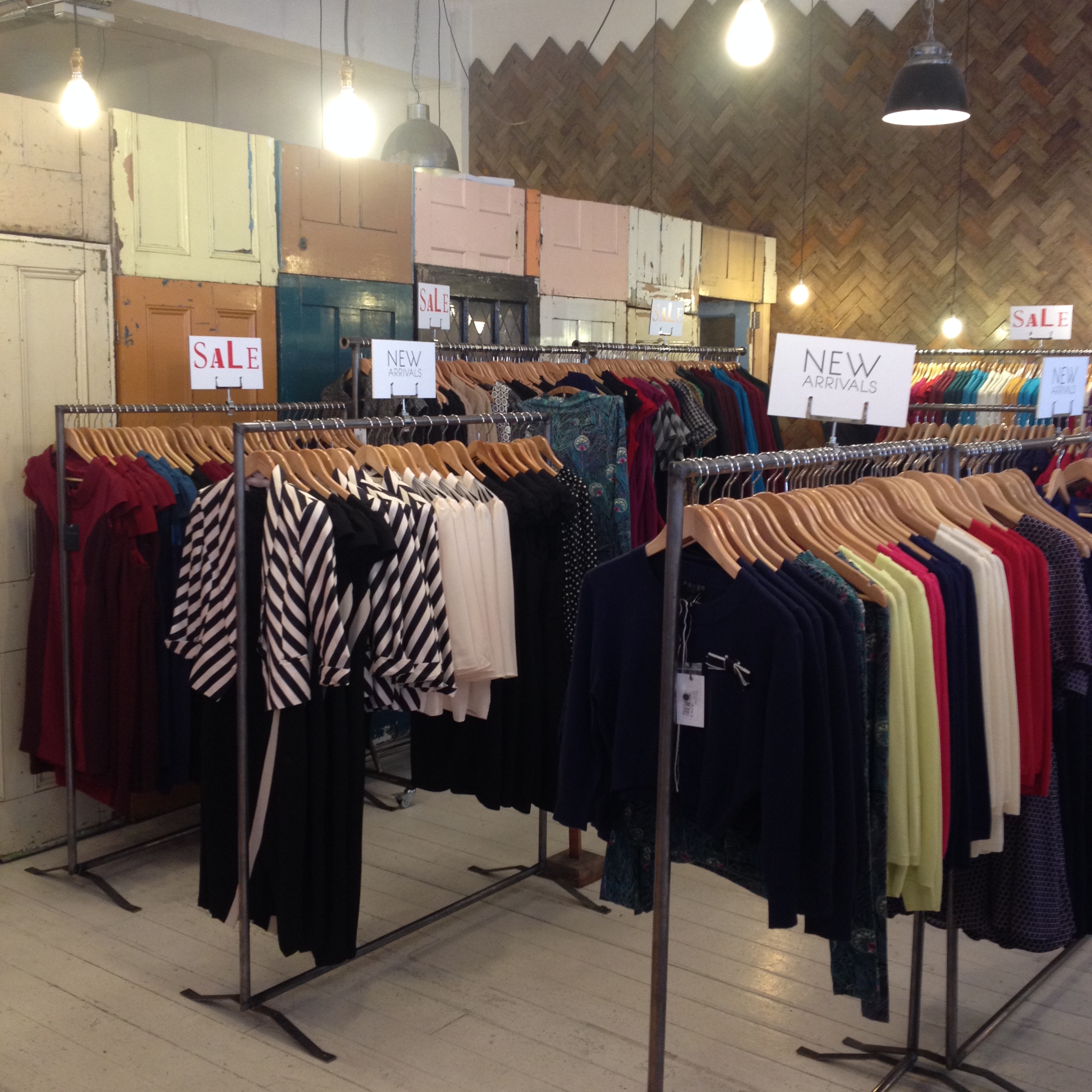 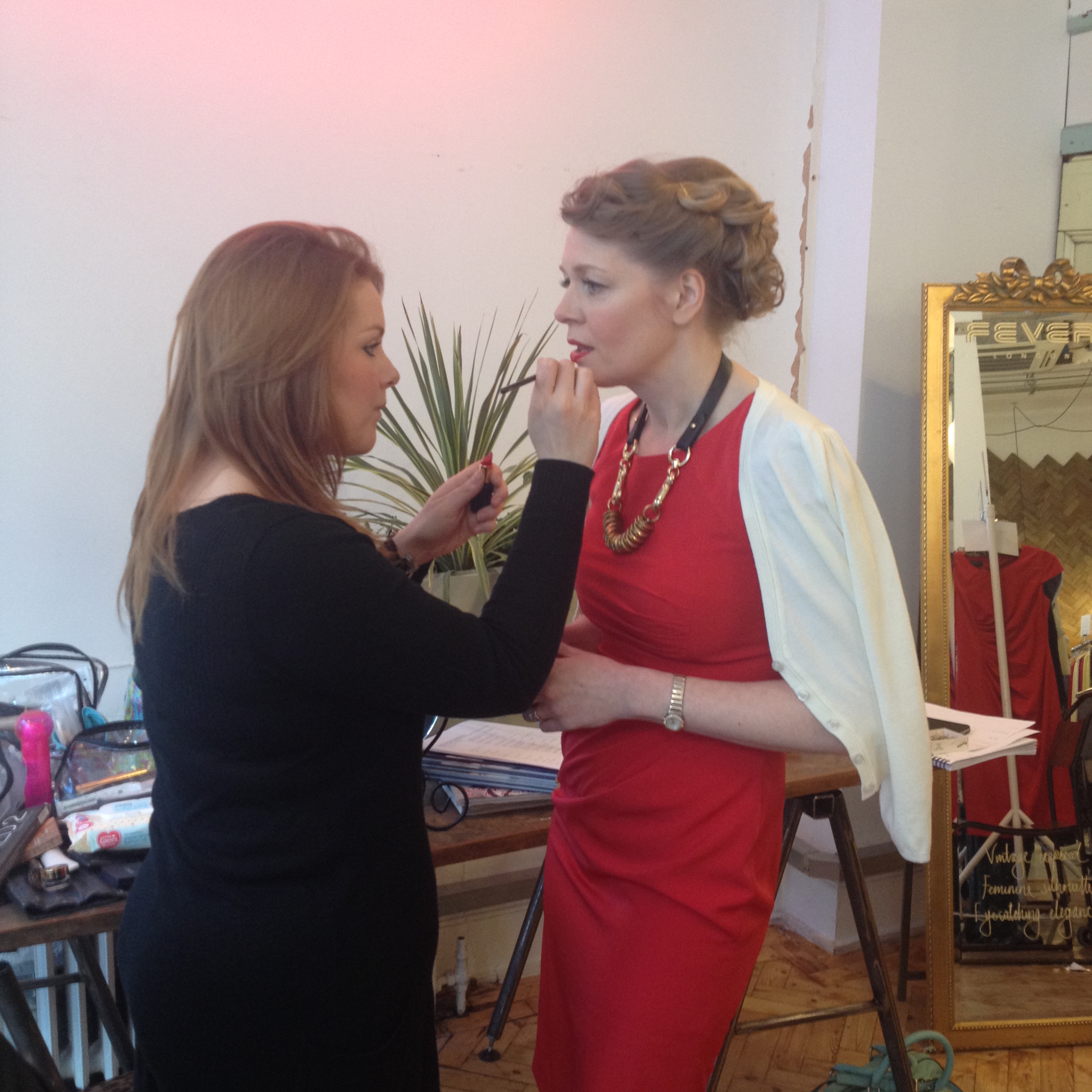 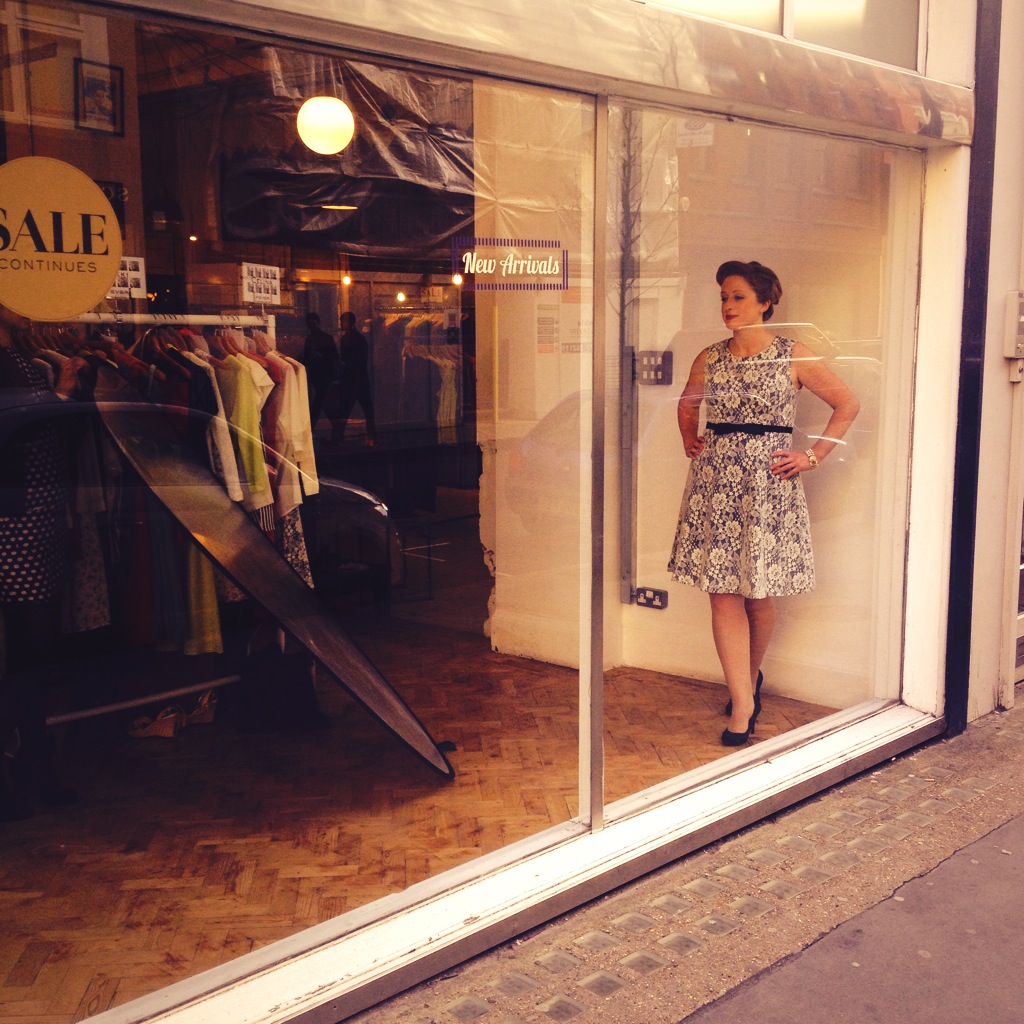 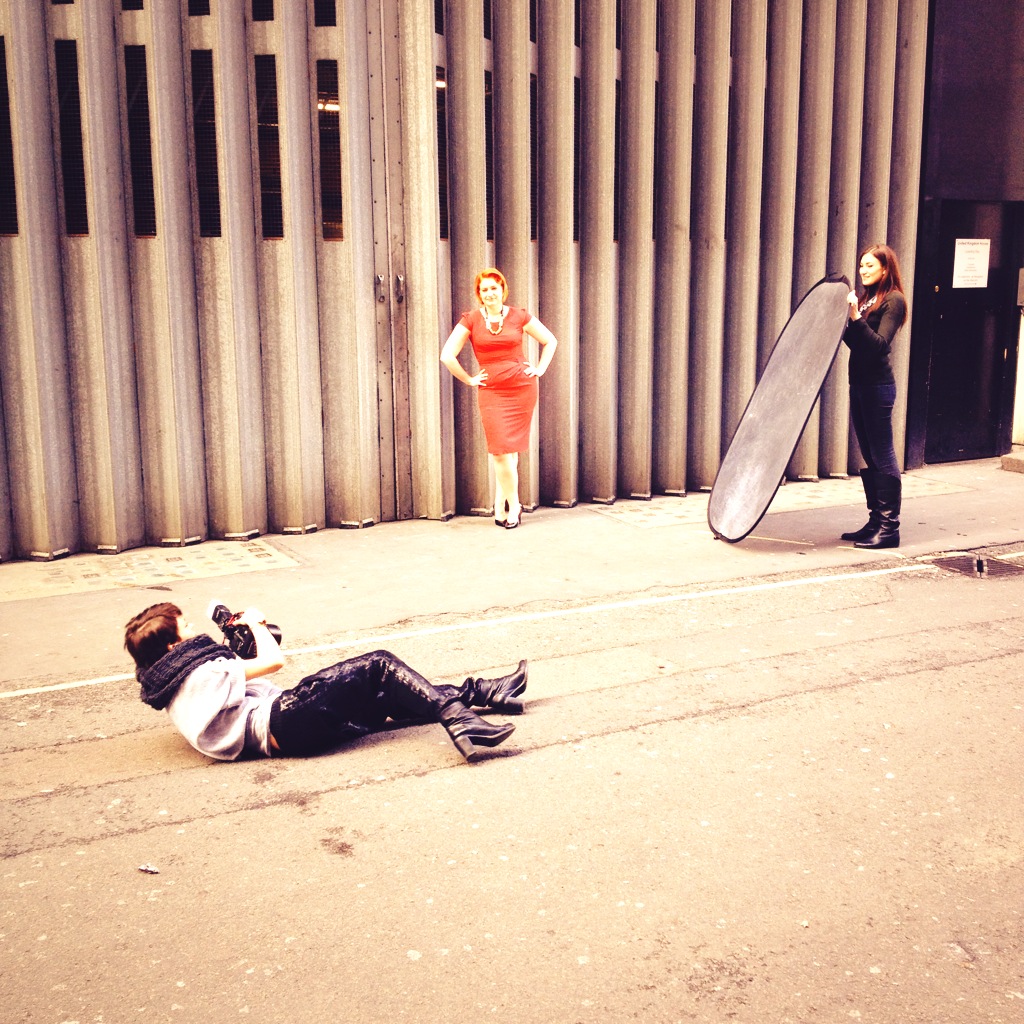 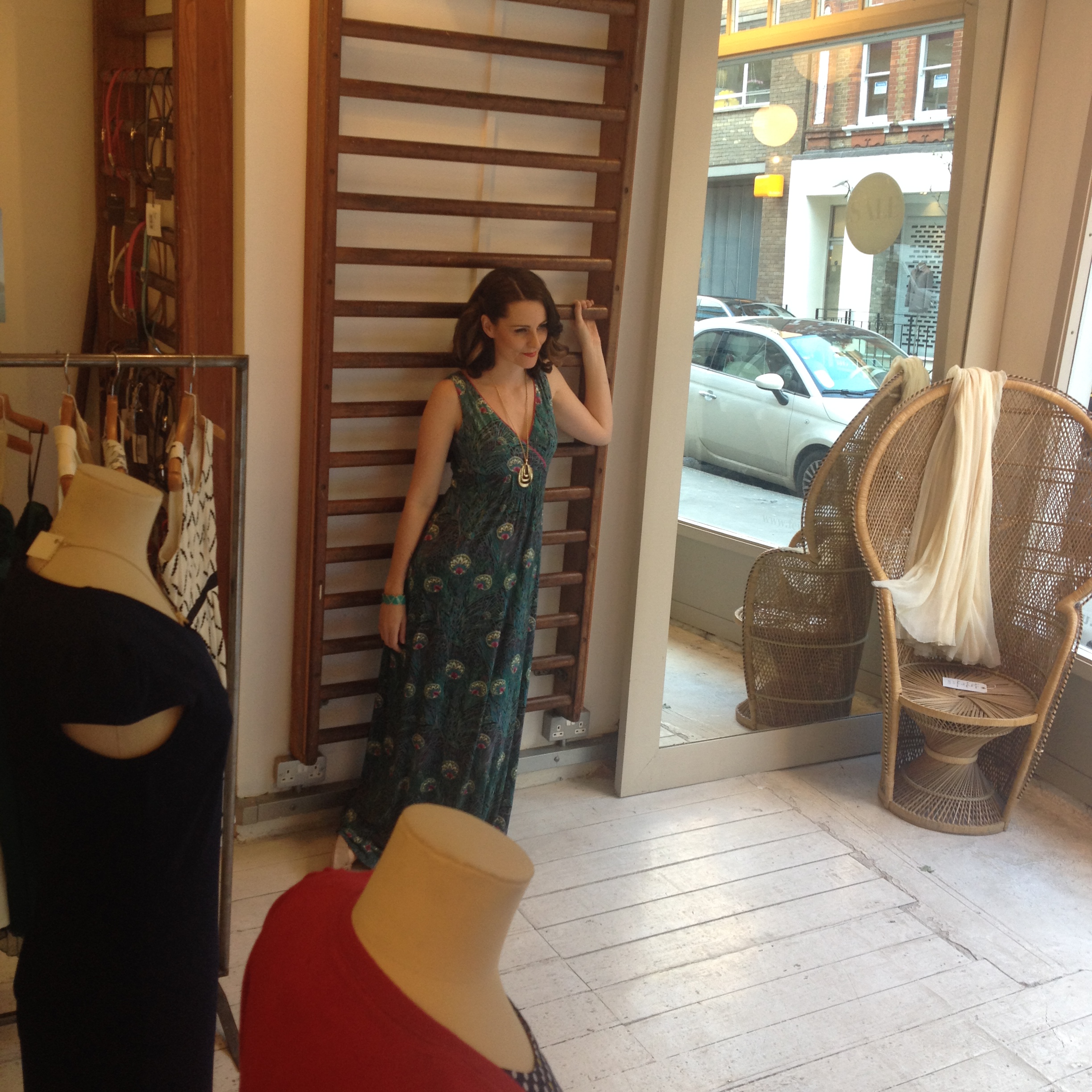 Deborah of the blog ‘Bang on Style blog’ modelling the Arlington Maxi Dress. 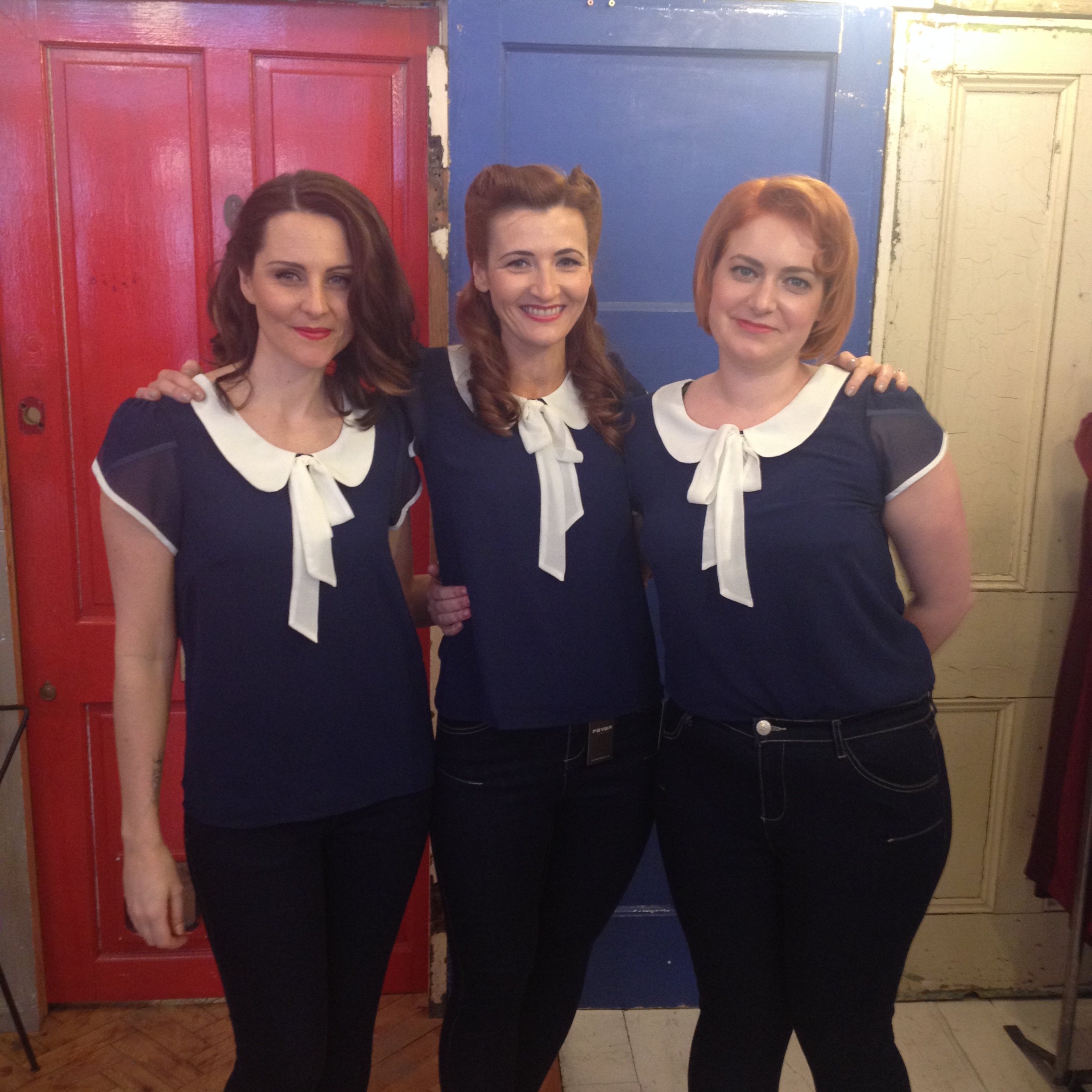 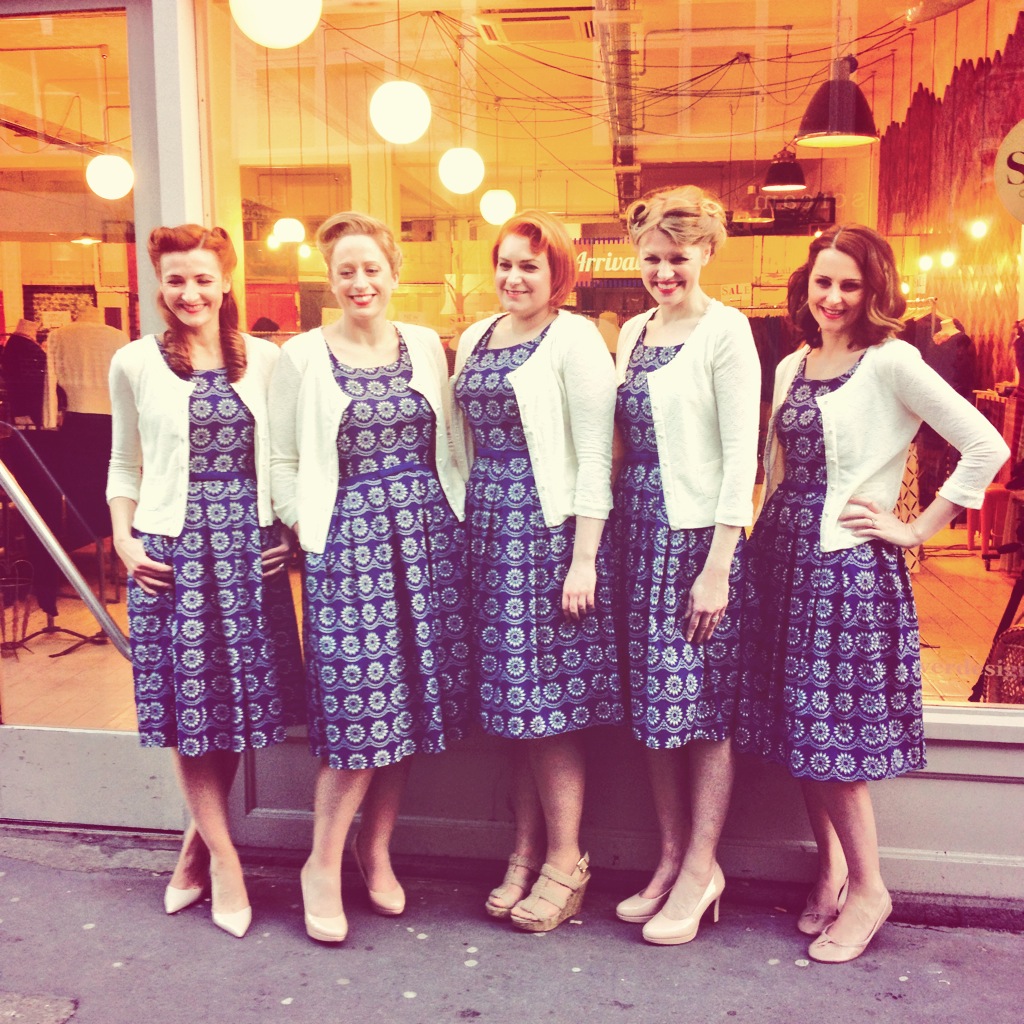 In light of our recent nomination for the European Search Awards we thought the time was ripe to share a few more details about our work with Wedding Rings Direct and the ’Bride of the Year campaign’, which earned us a nomination in the ‘Best Use of PR in a Search Campaign’ category.

Wedding Rings Direct offers the largest collection of quality engagement, wedding and eternity rings in the UK. We first started working with them at the beginning of 2013 when they approached us to help them increase brand exposure, customer acquisition and revenue having suffered a significant drop in natural search traffic as a result of Google updates and subsequent penalties.

As part of their strategy, we came up with the idea of a Bride of The Year campaign, aimed at raising brand awareness and boosting social media engagement, whilst also building a number of high quality editorial links.

At the launch of the campaign, we asked friends and family of brides set to marry in 2014 to nominate the brides-to-be with photo and the reason they deserved to be Bride of the Year. We then approached wedding related businesses with strong blog domains to help us publicise the competition, whilst also inviting them to donate items or services for the winner’s prize package in return for media coverage.

When the competition launched, we used an ‘old school’ PR approach via press releases and calls to the local media and relevant wedding bloggers. This secured us coverage in the main local newspaper, whilst also gaining editorial links from bloggers.

In order to generate social media buzz, we created a contest app for Wedding Rings Direct’s Facebook page where brides-to-be could be nominated and then voted for by family and friends. To encourage the highest number of entries possible, we supported Facebook activity with advertising, accompanied by sponsored stories to extend reach even further. 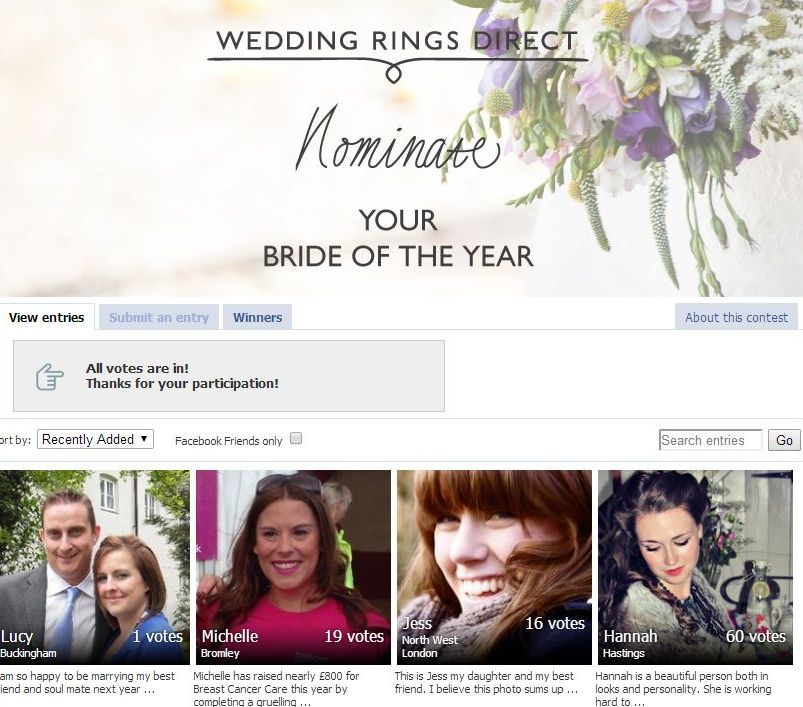 There were a total of 28 entries to the competition with each entry receiving an average of 65 votes and six comments per entry. Bride of the Year content was shared on Facebook 12,322 times during the two months the competition was live.

In October– after receiving more than 800 public votes– Rosa Lee from Brighton was crowned Bride of the Year 2014, receiving a set of bespoke wedding rings as part of a prize package worth more than £1,500.

In addition, year-on-year natural search traffic is now tracking above the pre-penalty level for the first time in twelve months.

Kate Rivera, Marketing Manager at Wedding Rings Direct said “We are so pleased with how the Bride of the Year campaign performed from both a brand awareness and social activity perspective. We increased our Facebook followers significantly and the campaign also allowed three months of daily social interaction with our audience across multiple social platforms including Facebook, Twitter, G+ and Pinterest.”

We’ve thoroughly enjoyed working on this campaign and were very happy to hear that due to the success of the competition, Wedding Rings Direct would like us to repeat and expand the competition nationally in 2014.

Watch this space for more details… and wish us luck with the European Search Awards!

Towards the end of last year, we were very privileged to work with iconic designer furniture store Heal’s on a blogger outreach project for their brand new collection of designer sofas.

Here at Leapfrogg, we all love Heal’s homeware and equally love any project that gets our creative juices flowing, so this quickly became one of our favourite pieces of work from last year. For this reason, we thought it would be nice to share a few more details about the project, the results, and also showcase some the inspirational images that came out of the campaign.

Established in 1810, Heal’s is the home of modern, designer and contemporary furniture, lighting and homewares. In September 2013, they launched a microsite for their new sofa collection and approached Leapfrogg to help develop a creative PR campaign to create awareness, drive traffic and build links from credible, relevant websites.

Heal’s had previously only targeted interiors and design blogs and wanted to capture a new audience of fashion and style-conscious consumers, in addition to re-engaging their existing customer base with their new products.

After brainstorming ideas, we came up with the concept of a #Healschallenge. We approached high-profile fashion and lifestyle bloggers and challenged them to design their ‘dream living room’ using a sofa from Heal’s new collection as the focal point, as well as featuring complementary items from Heal’s online store. 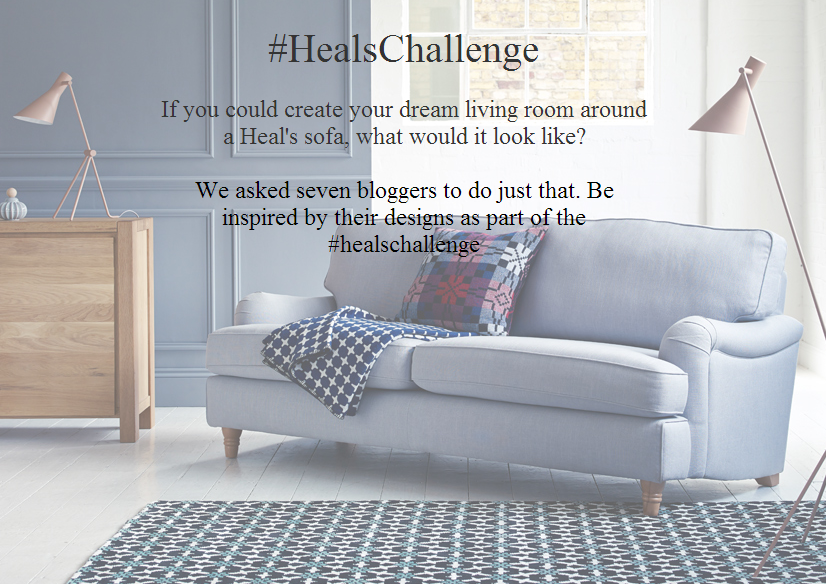 We asked our bloggers to document their design process by creating accompanying Pinterest boards to showcase their inspiration and the products which made up their ‘dream living room’, using the hashtag #HealsChallenge to extend the reach of the campaign even further.

The final room designs were judged by Heal’s, who selected Helena from A Diary of Lovely as a winner due to her colour scheme choices and fashion sense, which Heal’s felt brought a new dimension to their furniture. 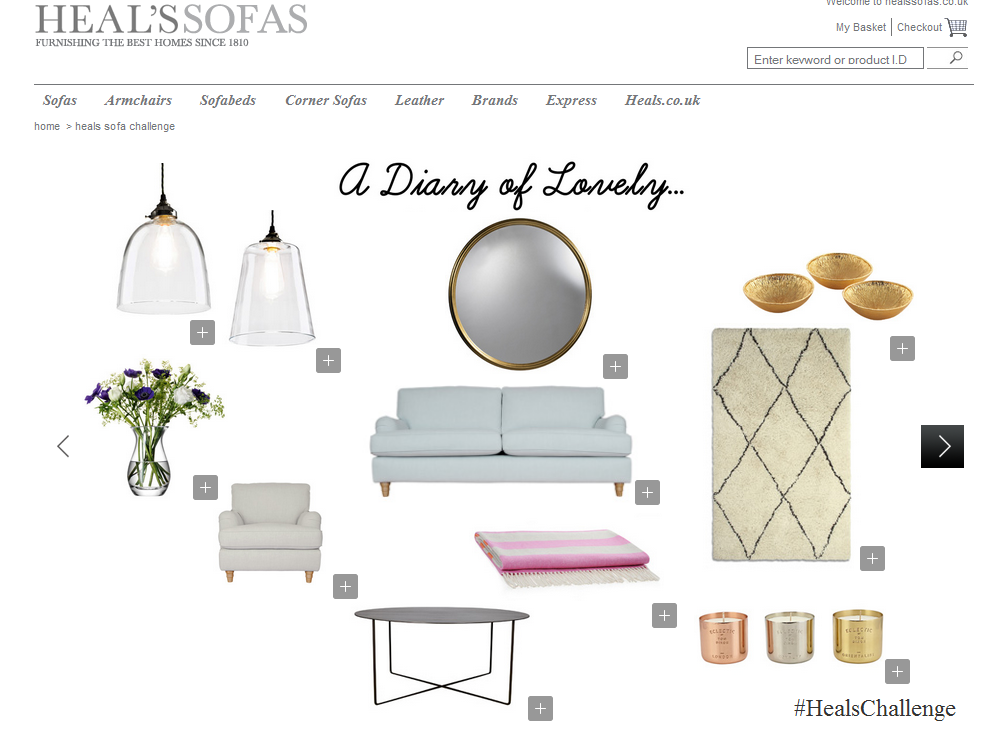 The winning design was then turned into an in-store display at the Heal’s flagship store in Tottenham Court Road.

The creation of the room set with commentary from Heal’s Head of Design was made into a video which we pushed out through Heal’s social media channels. 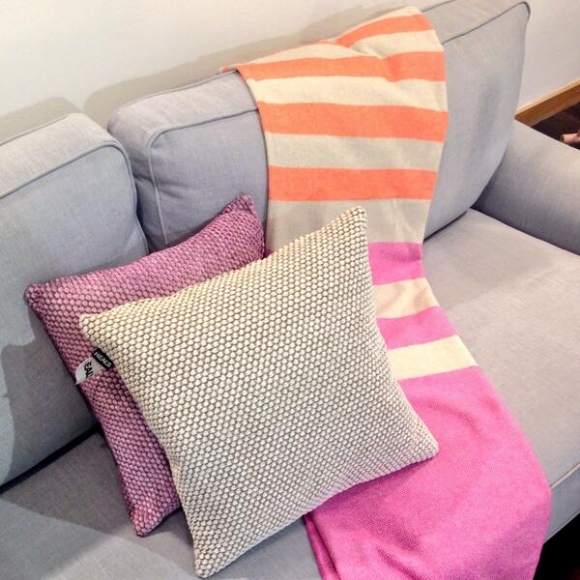 We were happy to report that our blogger outreach project resulted in significant coverage across a number of high-profile fashion and lifestyle blogs, generating content and traffic for Heal’s, whilst securing high quality, editorial links. Previously, there had been no link building activity for Heal’s new website.

The campaign also engaged and reached a new audience of style conscious fashion consumers and social buzz around the new sofa collection was created via the use of the hashtag #HealsChallenge and the bloggers’ Pinterest boards with reach potential of 6740 followers.

We thoroughly enjoyed working with Heal’s on this project and are very much look forward to working with the brand further in 2014.