Home The Froggblog The Future of Bing Advertising: Thinking Digital 2016 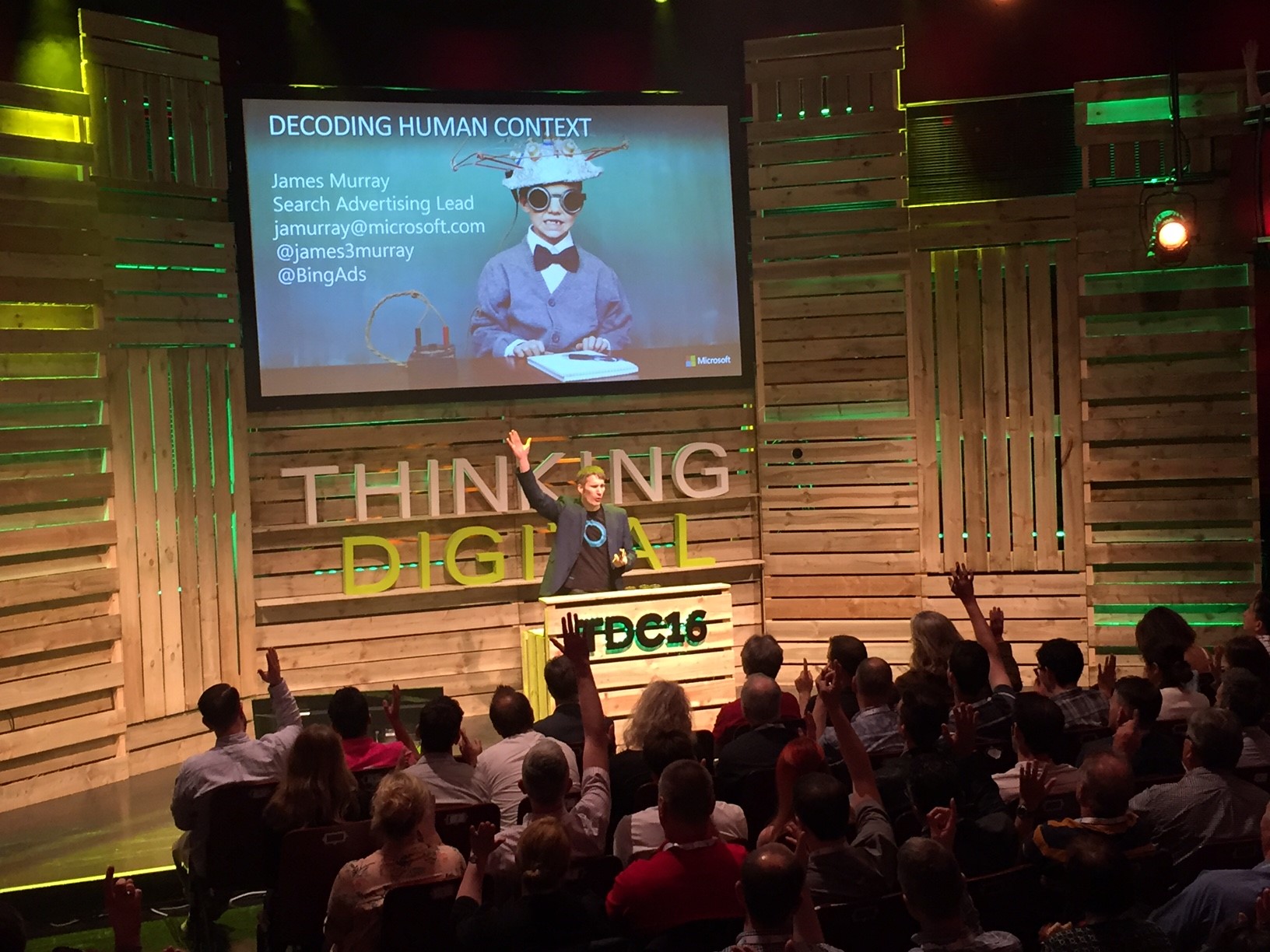 Thinking Digital is an annual conference, taking place in Newcastle every May. Over the years, Thinking Digital has built a reputation for attracting the best thinkers and speakers from the around the world – The Next Web has even described it as ‘The UK’s answer to TED’.

On the agenda this year, were talks from the likes of Bill Jinks who gave a talk about what it means to be an IBM’s technical advisor to the All England Lawn Tennis Club, Mikko Hypponen who gave an entertaining talk on cyber wars and hacking and Ed Hipkins, a rhythmic creator, who spoke about the limitations that inspire creativity which he illustrated with a live and reactive performance on stage.

As a Paid Search Consultant, I was particularly keen to hear James Murray speak who is a Search Advertising Lead for Microsoft UK. I also managed to catch up with James during the conference and ask him a couple of questions on the future of search advertising. Here’s what he had to say:

Where does Bing stand now and what does the future look like?

“It’s a really exciting time to be working at Bing and there is so much that is happening, it’s difficult to know where to start.

I guess one of the key factors is our market share is growing rapidly in virtually every market that we are present in. For the UK, Bing now powers 18% of all searches so we are edging closer to 1 in every 5 searches coming from Bing which is amazing progress considering where we were even two years ago. A huge contributing factor to that growth has been the launch of Windows 10. The encouraging thing for us is that on average, Windows 10 users make around 30% more Bing searches than in previous versions of Windows.

The integration of Bing across the Microsoft ecosystem is also helping us to gain traction with consumers in new and exciting ways. Skype Translate, for example, is made possible through the power of Bing. So I can now speak to my Taiwanese mother-in-law in English and she will hear Mandarin, and she can speak back to me in Mandarin and I will hear English. Not so long ago this was science fiction but Bing has made this a reality. That might not be search in the way we traditionally think of it, but it’s search nevertheless that is enabling that experience.

From an advertising perspective, we are also trying to push the boat out with Bing Ads and that same idea of integration is an important one for us. The next opportunity that we’re excited about is native advertising. The idea is that you can take your existing search ads with image extensions and run those same campaigns in a native experience across the Microsoft display ecosystem.

Let’s say you’re managing the search campaigns for a big car brand. You could target the same search ads you run in Bing Ads to also show as native ads in the MSN Cars website; all with a simple tick of a box and no extra effort required on your behalf. We have started piloting this in the US with some great initial responses. Whilst there’s no immediate deadline for the UK, watch this space!

Overall, we believe that rather than viewing search as a destination, search will become invisible, and simply be pervasive wherever and whenever you need it. Regardless of what device or software you’re using, even if you’re not using a Microsoft product, we want Bing to be there to help you be more productive. Search is going to start integrating into more of the moments that matter to us and will power the experiences that we need to make our lives easier.

How does your view differ from Google?

“Google is phenomenal at what they do and I think it’s fair to say that we’ve been playing catch up with them for a number of years. We do feel though that Bing is coming of age, and the momentum behind us is fantastic. Creating a great search engine takes time and Bing has reached a stage of engine maturity that the difference between us and Google is now negligible. In some cases, we actually offer a better search experience than Google.

When we put consumers through blind tests most people can’t tell the difference between Google and Bing which is a testament to the improvement in the quality of our results. What’s exciting for me is that having reached a certain level of parity with Google we can now start to differentiate Bing with new products and functionality that aren’t simply an “us too” feature.

We’ve started doing this at Bing Ads with partnerships with companies like Twitter. The launch of Twitter annotations allows advertisers to show how many followers the brand has on Twitter, adding extra levels of credibility to your ads.

We’re also playing with new ad extensions that are going to give advertisers more options than ever before to customise their ads and make them stand out in the SERP. One recent example of this is image extensions which allow you to add high res images to your PPC ads. This is just one of many new extensions we are working on to push the frontier of paid search.”

I’m very excited about Bing’s new offerings and the future of paid search. The arguments that James made just make me feel even more comfortable about the future and prove my point that Bing is worth investing money and time in.