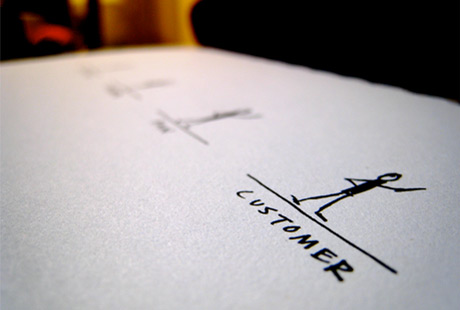 One of the aims of The UX Brighton conference I attended towards the end of last year was to show how philosophy could be used every day in the approach to work of those in in user experience field.

Being an Oxford Scholar of Philosophy, Marianne Talbot’s talk was perhaps the most academically focused talk of the day, offering a challenging introduction to those unfamiliar with the philosophical ‘action theory’. Her talk examined the distinction between inductive and deductive reasoning, and how they interact in our everyday thinking. So better understanding this theory should help us to better understand our customers’ right? I have attempted to make sense of the thought provoking talk for those of us who are slightly less academic.

Marianne starts with the action of humans, highlighting how the aim of a website is to stimulate action, often several, actions which could include buying, following, liking, clicking through, recommending and reviewing.

Action is something philosophers apparently know a lot about. To highlight this, Marianne asks the question, distinguish “tripping over a carpet” and “pretending to trip over a carpet” – which is the action and why?

If we want to understand action and how to stimulate buying, liking etc., it is necessary to understand reason. Make sense so far?

So how do desires and beliefs fit in with User Experience?

Marianne summarises how UX (User Experience) was born from the aim to ensure websites provide users with whatever they want (desires), this is however only half the picture as the user’s beliefs about how to fulfil their desires are the other half.

So since there is little we can do about users’ desires, the main aim should be to give your users belief that by using your website they can fulfil some of their desires.

So to give users the belief we can fulfill their desires we need to better understand beliefs. Marianne describes how all beliefs have contents, the contents of this consists of:

Deductive reasoning is the process of reasoning from one or more statements (premises) to reach a logically certain conclusion. Deductive reasoning links premises with conclusions, goes from general to specific and gives us certainty, the relation between beliefs are rational, for example:

Inductive reasoning is reasoning in which the premises seek to supply strong evidence for (not absolute proof of) the truth of the conclusion. It takes us from observations about the past to predictions about the future; this is important to humans and central to science.

Robert is a teacher.
All teachers are nice.
Therefore, it can be assumed that Robert is nice.

Inductive arguments can be good and bad however, take this example:

Women who drink this brand of vodka are beautiful, rich and attract the most handsome men.

If I drink this vodka I will become beautiful, rich and start attracting the most handsome men.

Where it gets even more confusing is whether inductive reasoning is rational? Marianne highlights how Scottish Philosopher David Hume noted that the inductive argument is based on the faith that nature is uniform, the future will be like the past, arguing this is non-rational, just because the sun has risen every day of your life doesn’t mean it will tomorrow.

SO, back applying this theory to user experience, we need to not only think about a customer’s desires, but their beliefs and behaviours, whether rational, irrational or non-rational. How do we do this? With customer insight at the core, of course.

• Actions are reason driven
• For an action to be reason-driven is for it to be:

• It’s not possible to reason anyone into a desire
• If you want to satisfy a users’ desires it is their beliefs you need to address
• Users beliefs can be changed and brought into being rationally, irrationally or non-rationally

You can see Marienne Talbot’s talk at UX Brighton here.