Here at Leapfrogg we believe it to be very important to socialise together. Every quarter to keep morale high and to relieve ourselves from the stress of the office environment, the social team organise some good old fashion fun for the team, this has ranged from a summer sports day to a cultural trip around Arundel Castle!

For April’s outing the social team came up with four varied options for everyone to vote on. At the beginning of April the voting commenced, I always get very excited about what the outcome will be and what adventure the froggs will endure. It was so close and pretty much neck and neck until the last couple of votes came in but the winner for April’s outing was, drum roll please……….Go Ape!

I think there were a few scared faces amongst us when Go Ape was announced but everyone seemed to remain positive and up for the challenge. The date was decided and I booked my troop of Apes in for an afternoon of fun. We were set to go the end of April, the wettest month so far this year with howling winds and flood warnings, but we weren’t to worry because Go Ape remains open no matter what the weather as long as there are no threats of electrocution from storms or gale force winds that would throw us from the trees! It actually turned out that we picked the perfect day with not a drop of rain….a complete fluke, thankfully.

I spent the morning in the office making everyone a packed lunch for the minibus trip to Bedgebury Forest, consisting of a handmade sandwich, a packet of hula hoops, a banana, a Kit Kat and a bottle of water, as we all know the frogs are rather fond of food so lunch went down a storm and I believe the little bag of treats was a highlight for some. The minibus ride was by no means boring with Rosie preparing a couple of games to keep us entertained. An hour and a half after leaving Brighton we arrived.

When we approached the Go Ape cabin excitement was bubbling as we all signed our lives away and awaited further instructions from our Go Ape instructor, Jack. We were taken round the back of the cabin and our induction began, harnesses were attached  and slight confusion followed as we lined up to do some basic cable training, I think a little bit of panic and hysteria started to set in for a few of us even though we were still on the ground. 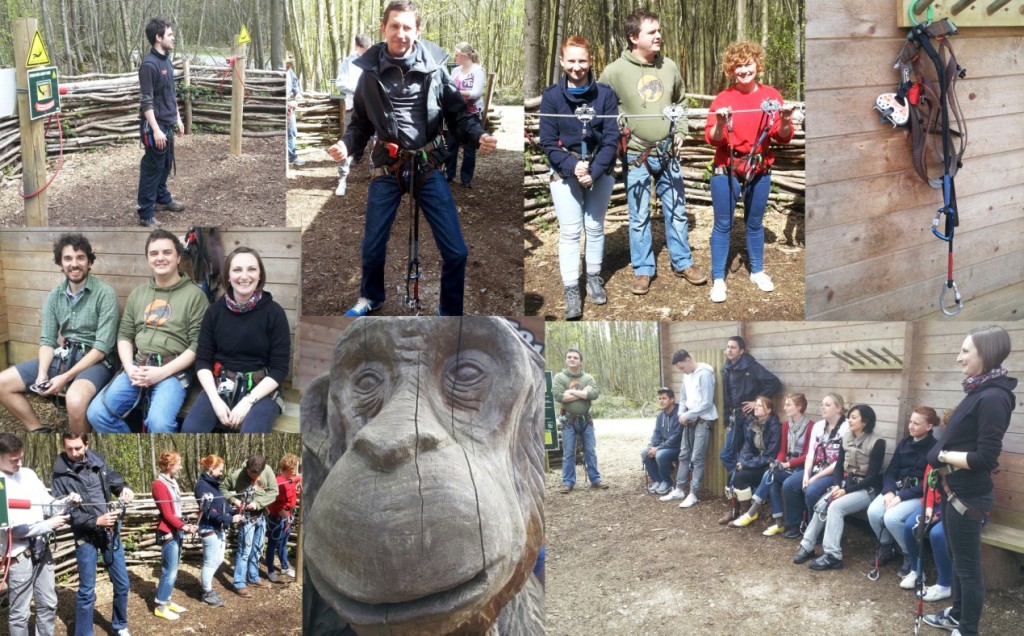 The most important piece of training we had to remember was to……. 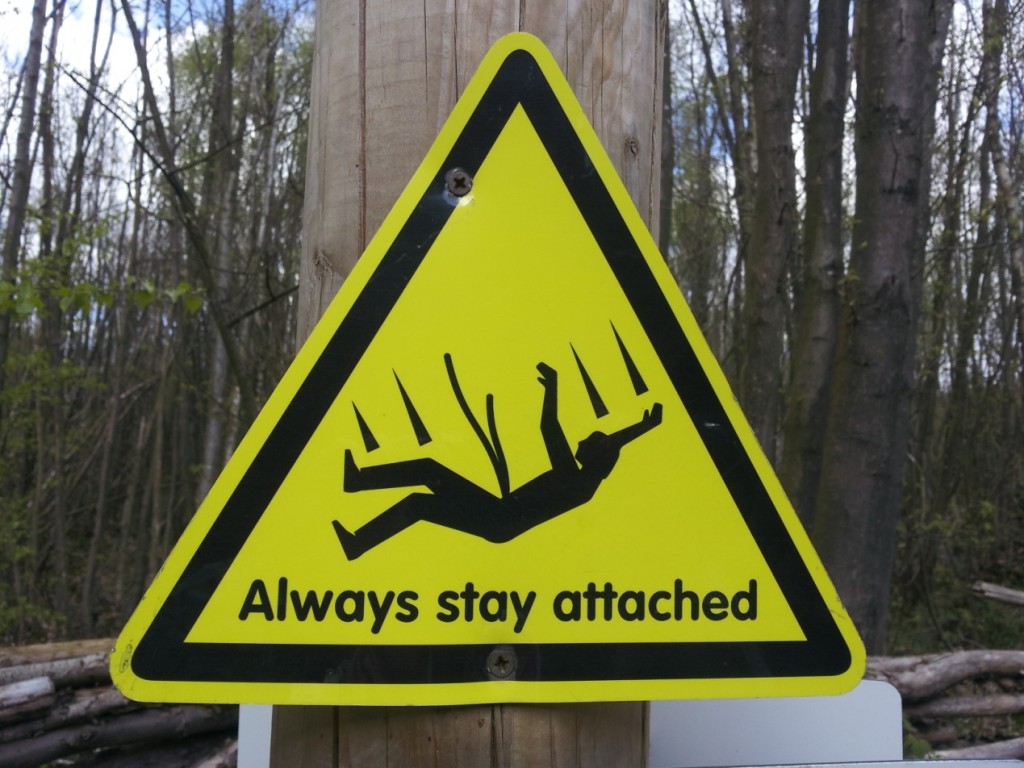 We then headed to a small practise area which was just off the ground so Jack could see that we all new how to attach ourselves and go across the cable. Then we were on our own and sent up to the tree tops to face our fears. We couldn’t all stick together as it would of taken weeks to finish the five part course but I know that those scared of heights and those unsure of certain obstacles (especially when you are 13.5 metres above ground) were supported tremendously by their fellow froggs. 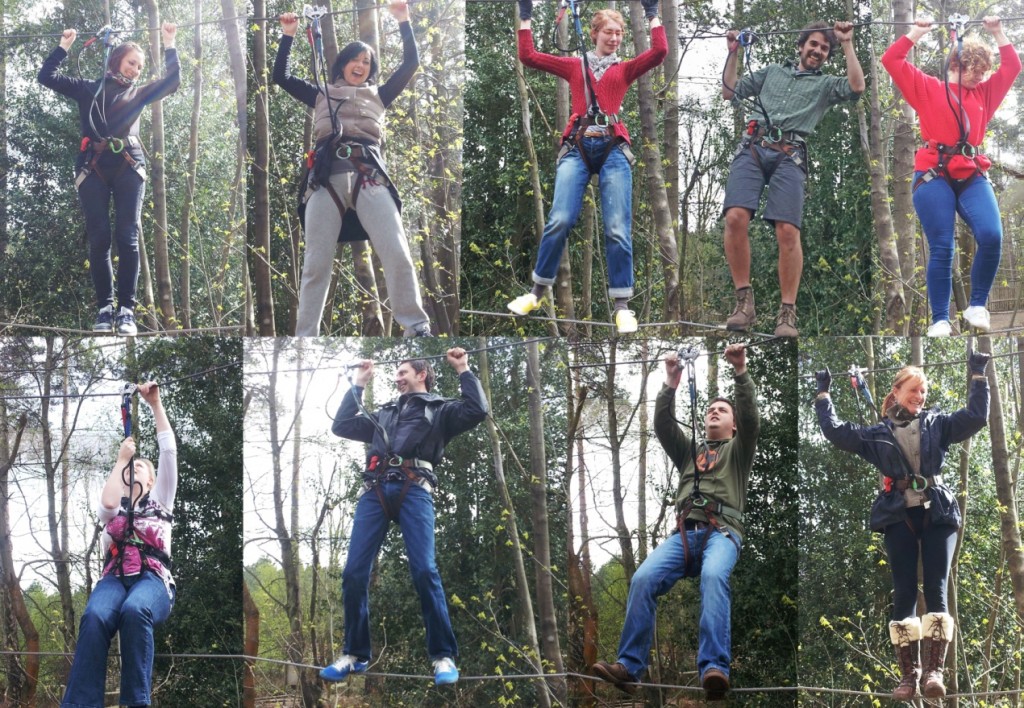 The courses consisted of  ladders to climb, wooden platforms, tight ropes, plank bridges, log bridges, net bridges and Tarzan swings with each course ending with a long zip wire to the ground. On course four and five we could decide whether to go extreme or easy, one of the extreme parts in course five was a real physical challenge (I think!) which consisted of foot stirrups to get you across the gap, very difficult and hard to get your foot out, but quite a few of us rose to the challenge and managed it.

All in all it took us 3 hours to finish, no one gave up and everyone gave it their best shot. Once on the ground after the last zip wire, with time to reflect, I think everyone thought it had been a grand afternoon.

So these froggs turned into Ape’s and lived happily ever after……keep your eyes peeled for Leapfrogg’s next adventure! 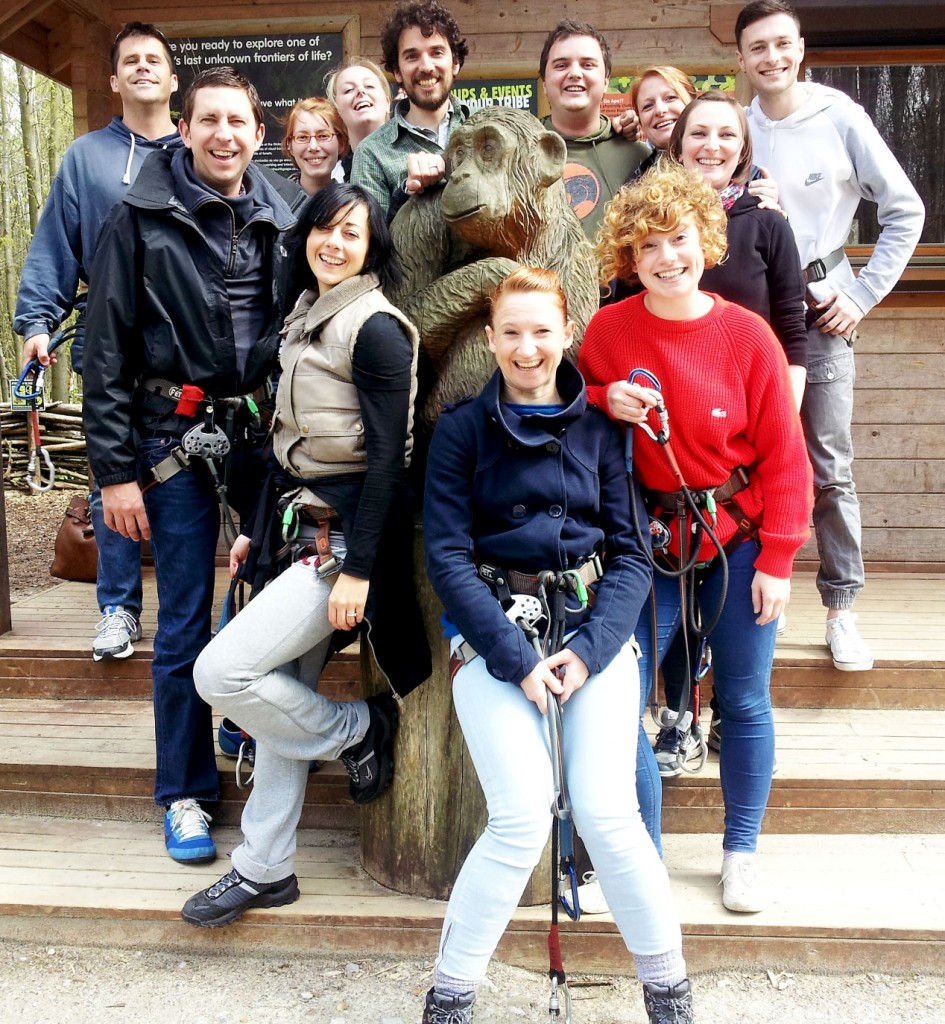