Image via WikipediaI set off to IMS London on a frosty Tuesday morning arriving too late at Clapham Junction to grab a Chai latte and instead had to hack it with a milky tea from Olympia station. For anyone who hasn’t been to Olympia, the venue is vast, I thought Earls Court was big, but this place would eat Earls Court for lunch and still have room for two star bucks and a subway.

The first speech was a ‘keynote’ and was entitled ‘Social media – the story so far and beyond the hype’, the speaker Michael Nutley the editor-in-chief of NMA began saying that

“Earning media was now the way forward and that the web was moving away from bought media into new realms”, he continued with “Brands are no longer what marketers tell them it is, its what peoples friends tell them it is”.He then took us on a rollercoaster ride through a number of compelling social media ‘failures’ and ‘successes’.

The first example was of the recruitment drive done by the ‘Royal Navy’ on Bebo, they gave an actual helicopter pilot a bebo page and let him simply post about what it was like to be a pilot in the navy and answered peoples questions and conserns. The recruitment drive was the most successful ever with huge numbers of young people signing up to be just like Brendan Spoors.

Another success story was Lego. Lego had for a long time ignored the community of Grown up Lego fanatics like those behind the website Lugnet, probably due to fear. But since the drop in sales of the building bricks, in favour of the new model toys, Lego took a risk and reached out to the huge communities of Lego fanatics beyond their sphere. They sent them free Lego and asking them to design new products which Lego would put on sale, of course the adult legoians responded en mass – sending design after brilliant design and the best bit, as Michael Nutley pointed out is that unlike their in-house designers these guys only wanted paying in Lego.

This is one of the new Lego development communities featuring an electronic Lego toy NXT which looks very much like ‘Johnny 5’.

THE BAD
You have probably heard of the Virgin Flight staff slagging off plane passengers on Facebook, and calling them ‘smelly annoying chavs’ and alleging saying that the plans were infested with cockroaches, although they didn’t get offensive about any of the roaches, which is something. Since the conversations were tracked down more than 13 Virgin staff have been fired, but as Michael pointed out, it is crazy that the company wasnt tracking mentions of itself being that Virgin is such a huge company.

Walmarts horrendous SPLOG is a famous one and featured a supposed wholesome american couple Jim and Laura that travelled around America in their RV parking overnite in Walmart carparks and talking about what they loved about Walmart. The blog had been commissioned by Walmart and developed by an agency called Edelman and when the blog was finally exposed both Walmart and Edelman’s President and Chief Executive Officer Richard Edelman was forced to make a public apology.

Unilever vs Dove, Dove’s real beauty campaign has been on our screens for a long time now and is one of the most successful beauty campaigns ever, due to its honest approach to the female form and a unique examination at the beauty of popular culture and how that affects everyday women. But, Dove is also owned by Unilever the huge conglomerate that owns a lot of other brands one of them being ‘Slim-fast’ a brand that is aimed directly at making woman who aren’t satisfied with their bodies the exact opposite of the Dove campaign that features proud plus-sized women. Unilever is also been forced to pull adverts for the american company ‘Axe’ that feature increasingly degrading images of woman, again the exact opposite of Dove’s ‘real beauty’.

The difference between companies now and a few years ago, isn’t that they are more ethical or that they are more open and understanding, it is all to do with visibility. Nike can no longer have their expensive shoes made in sweatshops, not because they feel bad but because people found out and those people don’t want to wear shoes that are made in that way. Companies need to have a handle on the information that is out there about them from tiny one man bands to huge conglomerates, they need to be tracking who is saying what about them and when, ok they can’t stop what is being said but they can respond to it in public and be accountable.

My next post will be on social media – control and commitment can companies handle it? 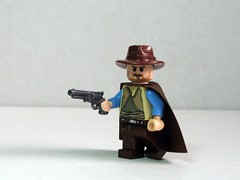 Image by Dunechaser via Flickr
Well can ya.. punk ?